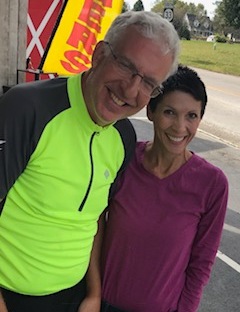 This past Saturday, Mom and Dad left Chloe and me – along with the rest of our Gang – at home while they went out for a few hours. A few weeks ago, they had been contacted by a lady who had our books but needed them signed for a charity auction. They planned to meet the lady and sign the books. “Don’t worry about it, Woody,” Mom said. “Your dad and I will take care of meeting the lady and signing the books. You, Chloe, and the rest of the Gang can stay home. We won’t be gone long.”

Mom and Dad met the lady in Harrodsburg – a town about 20 minutes away from our house. When they left Harrodsburg, they took Highway 152 and went to another town in Mercer County – the tiny town of Burgin. “What’s in Burgin?” you ask. The Burgin Dairy Barn – otherwise known as one of Mom and Dad’s favorite places to eat.

Mom and Dad were sitting outside, eating their usual lunch of cheeseburgers, Cajun fries and a vanilla/chocolate swirl ice cream cone when – like always – they struck up a conversation with the guy eating lunch on the bench beside them. Immediately, Mom and Dad realized the guy wasn’t from Kentucky. “How did you know he wasn’t from Kentucky?” I asked, as Mom and Dad told us the story. “Because he had a northeast accent,” Dad explained. Turns out, the man’s name was Jay. Jay is a Certified Public Accountant from Philadelphia, Pennsylvania and had an interesting story.

Back in September, Jay and his trusty bicycle boarded a plane to Los Angeles, California where he met up with several of his buddies. He and his friends left LA on September 10th with the goal of riding their bicycle across the United States. Mom and Dad asked where other cyclists were. “Sometimes we ride together, other times we ride at our own pace and meet each other at a designated spot to camp for the night,” he explained. That night, they were all meeting in Berea, Kentucky. Every few days they would stop somewhere and do their laundry. Sometimes they would stay in a hotel, other times they had to sleep at a campground. Part of their trip was on US Bike Route 76 – a bike route that runs from Missouri to Virginia. However, some of their route was on major roads and freeways. Whatever the case, Jay and his buddies were seeing beautiful scenery – and getting lots of exercise too!

Mom asked Jay what his favorite place had been. “Kentucky’s hard to beat,” he responded. “The people are so friendly.” Of course we all agreed!

“It was really tough at first,” Jay told Mom and Dad. “In fact, around the 3rd day I almost packed up and flew home.” He persevered and was now over halfway to his goal.  “We should arrive back home in Philly in another month,” he explained.

“We should ride our bikes across the United States,” I suggested to Mom and Dad. “Uh, I don’t think your tricycle could make it that far, Woody,” Dad replied, scratching my ears. He’s probably right, so for now I will just root Jay and his buddies on.

“We learned a lot by talking to Jay,” Mom informed.

“What else did you learn?” Chloe asked.

“Well,” Mom continued, “we were reminded once again that people shouldn’t have their cell phones out when driving since it would be really dangerous for everyone – especially to those riding bicycles or walking, we learned about Bike Route 76, and we learned that it always pays to strike up a conversation with someone and make a new friend.”

So that’s our encouragement to you today. Be careful on the road – whether you are driving, riding or walking, and take the time to meet someone new and make a new friend! And, as always, remember to Work and Dream like a BIG DOG!

Several months ago, our family packed up all our belongings in Shepherdsville, KY and moved southeast to Boyle County, Kentucky – more specifically between Perryville and Danville – although much closer to Perryville. Perryville is a small town of about 762 people and is located on the Chaplin River. The town is known for The Battle of Perryville, which was a major battle in the Civil War. We love it because Chloe and I have plenty of grass to roll in and dirt to dig in, cows and horses to look at, and we rarely hear sirens or traffic noise. The best part about living in a small town is that everyone knows each other and looks out for one another.

A few months ago, a lady in town invited us to attend an art exhibit in Perryville. We asked where the exhibit was held and learned it was at Walden Funeral Home – the local funeral home in town. “THE FUNERAL HOME?” we asked. “Well, of course!” she answered, as if every art exhibit was held at the funeral home. So Mom and Dad went. The art was beautiful and they immediately became friends with the funeral director, David Walden. Mr. David said, “You know, in a small town, the funeral home is one of the nicest buildings around – and it stays empty more than it stays busy. So we like to do community events. Would Woody and Chloe do a book signing here?” Mom came home and asked Chloe and me. “Sure! Why not?” we answered. So Tuesday night , October 17th, at 7:00 pm, we will be at the Walden Funeral Home in Perryville. If you’re anywhere in the area, come out and see us. You can drop in any time and see Chloe and me, meet Mom and Dad, have your picture taken with us, have a book signed if you like, or just visit. Whatever the case, I promise we will have a te-RUFF-ic time! Besides, it will give us a chance to meet even more of our neighbors and learn their names. Mom and Dad are always reminding Chloe and me that it is very important to listen to someone when they tell us his or her name – and then remember it and use it.  Mom and Dad love the book, “How To Win Friends and Influence People” by Mr. Dale Carnegie. Mr. Carnegie says “A person’s name is the sweetest sound in any language.” So we work hard at trying to remember names. It’s all part of Working & Dreaming like a BIG DOG!

PS – The Forkland Heritage Festival was a huge success. Check out our Facebook page for pictures!

Chloe and I were just going over our calendar for the next two weeks. School visits, presenting at a conference, a book signing at a festival, speaking at a homeless shelter and even doing a program at a funeral home – more on that later. A busy few days for sure. Add in cat naps, digging in the yard, chew toys and barking at the vacuum cleaner and we our schedule is packed! But we wouldn’t have it any other way! I mean, how many other wiener dogs get to travel around with their wiener dog sister, Chloe, and their human Mom and Dad? Not many. We are lucky dogs for sure. You see, I was the runt of the litter. The farmer said I would “never amount to anything.” But that was before a lady came and rescued me. I will never forget it! I was in the back of the barn, all alone. I remember someone reaching down and scooping me up. This lady was so kind – and she smelled oh so good – like fresh-baked sugar cookies. The best part? She never put me down. She carried me outside the barn, named me “Mr. Dogwood Furr” and called me “Woody” for short. Immediately, I had a mom and a wiener dog sister named Chloe. Not too long after, Mom married Dad. Our family was complete. Now, our family has grown to include lots of animals, 8 published books, several published newspaper serial stories, a passel of awards under our collar, thousands of miles traveled and countless friends!  I’ll say it again – lucky dogs for sure!

Just last week someone said, “Woody, why don’t you blog anymore?” That was all it took. I asked Mom if I could have another blog account. “I’d love for you to blog, Woody,” Mom answered. “But people are busy. So if they are stopping to read what you have to say, make sure it counts. Use your words to encourage others.” I’m still not sure how I can encourage others, but I promised Mom I’d try.

Mom, Dad, Chloe and I are getting ready for a two-day festival called the Forkland Heritage Festival and Revue. The festival honors Veterans. We’ve been working hard on our booth. Dad has made lots of neat things for us to display. If you’re in the area, please come see us.

I asked Dad why Veterans were so special. “Woody, think about all the things you have – a nice, warm bed, plenty of food, freedom to run and play and learn. Well someone gave up all of those things – plus so much more – so you wouldn’t have to give them up.” As I listened to Dad, I realized just how special these men and women really were. I may not have the opportunity to serve in our Armed Forces, but I could definitely honor the people who do serve and have served. And I would work hard to be best citizen I could be.

I’ll be sure to post lots of pics from the festival so check back soon! In the meantime, “Work and Dream like a BIG DOG!”